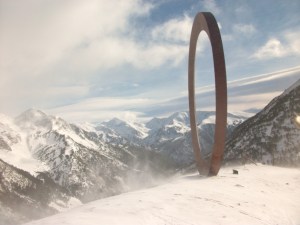 I have to admit I’d never heard of Arcalis before my trip to Andorra this year, so it was a nice surprise to discover that it is part of the Arinsal/Pal lift pass.

Arcalis is known in the region as being more of a locals’ ski area. There is no resort or town there as such, and as most of the skiers in Arinsal are beginners, few venture over on the 40 minute bus journey. Our Crystal rep, Jake, recommended that we ski Arcalis earlier in the week, before the weekend rush. His advice was spot-on. We had two days in Arcalis, and the conditions were quite a bit better than in Arinsal or Pal. The runs still weren’t groomed all that well, as I discovered when I hit a patch of rocks at full speed and had to pick my way through whilst hopping on my skis, but they at least looked prepared for something other than beginner skiers. The far side of the mountain still suffered from the high winds that had also hit Arinsal, though. At

one point I threw myself into a tuck, pointed my skiers straight down the mountain, but felt like I was going nowhere because the wind was blowing me back up the hill again.

A couple of the runs were closed off to the public, due to youth slalom races, which was a shame. What was open was good fun, though. The freestyle area, an entire mountain dedicated to whatever you want, was also opened on the second day we were there. I didn’t fancy trying it on my own without someone who knew the area, so that will have to wait for another time.