When I was in Cologne, I was travelling with an omnivore friend. I decided the best way to choose where we ate was to pass her the Happy Cow app and leave it up to her. I told her I would eat anywhere listed as vegan-friendly. This is what she picked:

Naturata City – As well as being a handy place to shop for vegan snacks and essentials right in the heart of the city, this organic supermarket also houses a café  They serve meat, with veggie and vegan options available, and it’s self-service canteen style. I found the food labels in the café to be a little confusing, but the girl working behind the counter was happy to explain to me what I could and couldn’t eat.

Osho’s Place – Like Naturara City, Osho’s Place is a canteen-style restaurant. It’s all vegetarian, and the food is priced by weight. I was disappointed that they didn’t have many vegan and gluten-free options. The little I could eat was from different priced dishes, which led to the lady at the checkout getting very annoyed with me because I hadn’t understood their system of what goes in which bowl or on which plate and at whch price. In my hungover state, I told her just to charge me the most expensive price so I could sit down and eat my food.

Past & Future – I was surprised when my friend picked this restaurant because it is 100% vegan, but we loved Past & Future so much that we ended up going back there on our second night in Cologne as well. I’m sure their a-la-carte menu is very tasty, but to be honest I don’t know because I didn’t get past the amazing all-you-can-eat buffet. There are lots of gluten-free options too, and make sure you leave room to try the chocolate avocado mousse for dessert.

Cologne is Germany’s fourth largest city, and therefore bigger than Frankfurt. The layout of the city somehow makes it feel smaller. One thing there is a lot more of in Cologne is tourists, and the main reason for that is the cathedral. The gigantic structure towers over the city. It took 600 years to build, although admittedly for 300 of those years almost no building work was carried out. I didn’t go inside the cathedral, but I was impressed by the detail and skill demonstrated on the outside of the building.

A great way to see the city is with the Can You Handle It? free walking tour, which meets outside McDonalds in Rudolf Platz every day at 12noon and 4pm. Be aware that it is a long walking tour, and we were with our guide Helgi for more than 3 hours.

Since it was bombed during World War II, there isn’t much of the old town left. Most of Cologne was destroyed within just 90 minutes of one bombing raid. It is believed that Cologne wasn’t actually the Allied’s target that night, but bad weather forced them to change their plans. It’s bizarre to think that, if the weather had been clearer, the architecture of Cologne would now look totally different.

Helgi told us about how Cologne was quickly rebuilt after the war, plainer and simpler buildings being more efficient than recreating their elaborate predecessors. I still think there is beauty in these purpose-built structures though, especially when I compare them to the pre-fab buildings that made up part of my middle school in England. 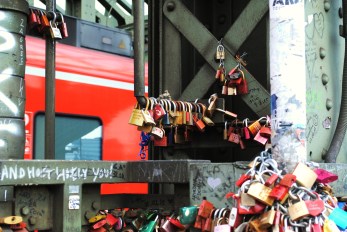 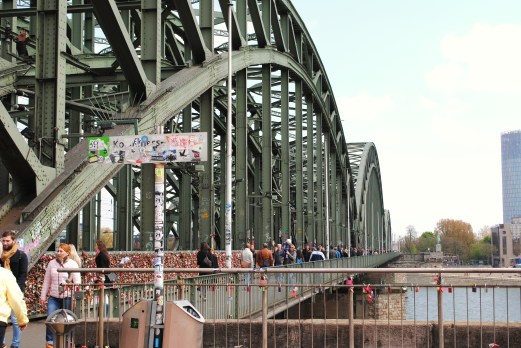 Frankfurt and Cologne have a lot in common. There is a bridge with love locks here too, although the sheer number of padlocks in Cologne compared to Frankfurt suggests that Cologne city council are not so concerned about the potential dangers. In fact, Helgi told us that the locks are more likely to be removed by people scavenging the metal to sell.

Gunter Demnig’s stumbling blocks are also dotted all over Cologne, and their locations give an indication of how the layout of the city has changed.

The basement of the NS Dokumentationszentrum houses an insight into Cologne’s third reich history. It was used as the local gestapo prison where people were interrogated, tortured and killed, executions often occurring in the courtyard. Inscriptions written by prisoners can still be seen on the basement walls, the last one reading ‘I think I can see an American soldier’. 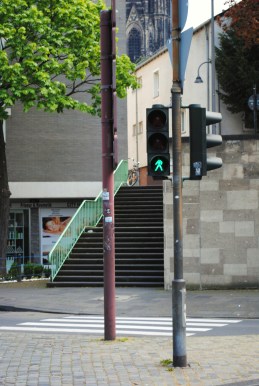 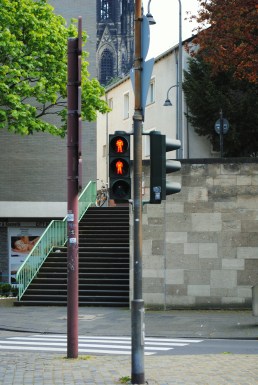 One curious aspect of Cologne that I had to ask Helgi about is the green man signs for crossing the roads. In every other European city I have visited there is one green man and one red man instructing you when it is safe to cross the road. In Cologne, however, there are two red men and one green man. Helgi told me that he had heard various reasons as to why this is, but the most probable is that it saves money. Traffic lights usually come in sets of three, so rather then spend money requesting sets of two lights for the pedestrian crossings the city of Cologne thought they’d save a few euros by bulk ordering.

Like all good holiday destinations, Cologne has it’s own local tipple. Kölsch is a light and hoppy beer served in 0.2l measures. In a lot of bars in Cologne, you will automatically be served Kölsch upon arrival. When your glass is empty, the server will replace it with a fresh one. When you are finished drinking, you indicate this by placing your beer mat on top of your glass. It seems a bit unhygienic to me, but I guess it avoids having to queue at the bar or attract the server’s attention.

All I need is for the breweries of Cologne to develop a gluten-free version of Kölsch, and it would be a strong contender for my favourite city in Europe.

We travelled from Frankfurt to Cologne with blablacar. It was a very last minute decision, and a totally new experience for me. For only ∈9 per person we got an efficient transfer in a nice car with a friendly local, and we also got to know our other travelling companion in the car.

Can You Handle It? walking tour is free, but tipping is strongly recommended.