Please note, this post is part of a series. Click here to read it from the beginning.

As I was pushed for time to get up to Anchorage by 20th June (when I would pick up my G Adventures tour), I had the genius idea of catching the Greyhound overnight from Sacramento to Portland, OR. It was due to leave Sacramento at 7pm and arrive into Portland 9am the following day, giving me a whole day in each destination. Brilliant. Unfortunately, the gods of bus maintenance had other ideas. Due to previous problems before it even got to us, the bus didn’t leave Sacramento until gone 8pm. Then, as soon as we left the flat land of northern California and began to encounter hills, the bus began to struggle again. One of my fellow passengers did explain to me what had happened, but in all honesty all I understood was that there was a snapped belt lying on the floor outside the bus door and without it we couldn’t go anywhere. So, just after midnight, we found ourselves stranded in a place called Reading with a water fountain and a broken vending machine. Oh, and about a thousand cockroaches, mosquitoes and a few homeless people asking for money. It didn’t help that the driver kept getting our hopes up only to dash them again. I kid you not, this was her announcement to a bus full of tired, sweaty travellers stuck in the middle of nowhere with no air conditioning:

‘In a few minutes a really nice, new Greyhound bus will stop here. It will say Portland on the front.’

‘In another hour, a really old, white box bus will pull up. That is our bus.’

Was she kidding us?

Despite its age, however, and sounding like it too might pack in every time we hit an incline, Old Faithful did not let us down.

The delay also allowed us to bond with our fellow passengers on the bus. Greyhound buses are much roomier than other similar transport, which leads to a more relaxed atmosphere where you don’t feel you want to commit mass murder by the time you get off. We all swapped stories of why we were there. Some people were making their way home, some to visit family. A few, like me, were travelling (although no-one else to Alaska). One guy looked like even he wasn’t sure why he was on his way north. All in all, though, I couldn’t have wished for a nicer group of people to be stranded with.

We didn’t reach Portland until 1pm, four hours behind schedule. I considered staying on the bus with the others and continuing straight on to Seattle, but changed my mind when I heard they’d have to wait until 5pm for yet another bus to pick them up. They weren’t going to get to Seattle until 9pm.

Another person due into Portland the same day was James Lawrence, also known as the Iron Cowboy. He’d challenged himself to complete 50 triathlons, in 50 states in 50 days. I had no right to complain about 17 hours on a bus and having to walk from the Greyhound station with swollen ankles.

After checking in at HI Portland, my first stop was food. One amazing superfood-filled Bali bowl from Veggie Grill later, I was (slightly more) full of energy and ready to explore.

By this time it was already gone 3pm. I needed to find a way to see as much of Portland as possible in a short time. I wandered down to Pioneer Square (Portland’s ‘living room’) to find the Visitors Centre. On the way, I’d passed children playing in the water fountains. In this heat they probably had the best idea, and I considered joining them. 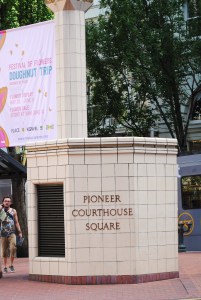 In the Visitors Centre, a bright pink leaflet caught my eye. The Big Pink Sightseeing Trolley is a hop-on, hop-off service that stops off at 12 Portland highlights. I scanned the schedule – the last trolley didn’t leave until 4pm! I wouldn’t have time to hop-off anywhere, but at least I’d get to see some of Portland. The lady at the ticket booth even gave me a discount because it was the end of the day.

Although the commentary could barely be heard above the noise of the trolley, our driver was really nice and happily answered questions that he probably gets asked a thousand times a day.

I definitely made the right decision by taking the trolley tour. It took 90 minutes to go around the whole of Portland, and the driver wasn’t holding off the gas, believe me. There’s no way my swollen, blistered feet would have carried me up to Washington Park, the International Rose Test Garden or the Oregon Zoo. And it was worth it for the panorama. We had a clear view of Mount Hood, with it’s snow cap teasing us as we sweltered in the city heat. 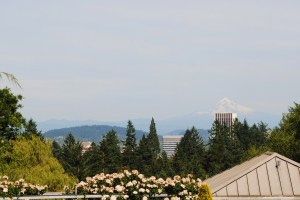 Due to its unusual number of breweries, Portland has many nicknames that revolve around beer. What I noticed was not so much the breweries, but the number of bridges that cross the river. Our driver explained to us that, before the bridges, there were 3 ferry services. Before the ferries, a local businessman taught his horse to swim and would charge people to be dragged along behind it.

One of Portland’s famous sons is Matt Groening, creator of The Simpsons. Apparently, there are still teachers at Lincoln High School who turned into characters in the show, and you can see road signs and landmarks around the city that obviously inspired the young cartoonist.

I’ve always wanted to shop in Whole Foods, and it particular try one of their to-go boxes. Portland gave me that opportunity at long last. My take-out dinner of quinoa, beans, salad and veggies with a bottle of Kombucha (my new obsession) was the perfect way to relax after my dizzying tour of Portland. It was sobering to think that while I’d been touring Portland and eating two whole meals, by the time I was back at my hostel some of my bus companions from the previous night would not have even reached Seattle yet. Hopefully, my bus journey the next day would not prove as eventful.

Greyhound Sacramento to Portland: from $75

HI Portland: from approx. $30 per night

Although it sounds miles away from Cardiff (another capital city in another country!?!), Heathrow is actually only a two hour drive from where I live. Even at peak times, the M4 is never anywhere as crazy as the M25 (otherwise known as the London orbital car park). Unfortunately, although getting to Heathrow is easy, you have to tack an extra hour on to your journey to find the long stay car park. I swear if you follow the road signs you double back on yourself at least twice and end up somewhere close to the motorway exit you just came off.

Note to car battery – please, please do not die during the four weeks you are parked at Heathrow airport.

When did the Virgin Atlantic check-in procedure suddenly get more complicated than your passport application? I love flying with Virgin (especially if the option is them or British Airways, who I only fly with when walking is my only other viable choice), but having to give them my mum’s contact details and a brief summary of my planned trip seems a bit extreme just to board a plane.

My early morning start was soon forgotten when I popped into Pret for breakfast. Oh my god I love those guys! Soya milk decaf latte, gluten-free and vegan porridge (yes!!!), fresh fruit salad and a protein salad. What a great healthy meal to start my trip.

If only my plane food had been as successful as my breakfast. I’d contacted Virgin Atlantic via email the previous week and asked if they could provide me with a vegan and gluten-free meal. They’d replied no, I had to choose one or the other. I chose the vegan option in the hope that there would be something I could eat. Other than the fruit snack, there wasn’t. It was all pasta, sandwiches and wraps. I’d taken my own food on board, so I didn’t go hungry. And the cabin crew were very understanding, giving more of the things I could eat and even offering to make me a jacket potato. I was annoyed when one of them told me you can pre-order a bespoke meal, so if anyone finds themselves in the same situation I’d recommend pushing the subject with customer services before you travel. And take some food with you just in case.

When I was at school, we used to argue with our maths teacher that the subject was useless. On the off chance that he might be reading this, I’d like to apologise. I have found a genuine use for GCSE maths – trying to buy a ticket for the BART in San Francisco. The Bay Area Transit is a great mode of transport, but I don’t remember it being so weird to use. Never before have I seen a ticket machine where you have to find the fare you need from a list, put in what money you have and then subtract off what you don’t need. But hey, as the lady next to me who was also having trouble with the machine pointed out, people from San Francisco probably find the London Underground strange.

I caught the BART to Oakland, and then dashed through the city (as much as I could dash with 2 backpacks on) to the Greyhound station. Oakland looks nice, I’d like to go back some time and see it properly.

The Greyhound I travelled on from Oakland to Sacramento has the slipperiest seats I have ever been on. I’m glad I’ve been keeping up with pilates training recently because it took all my core strength just to stay on the damn thing. I also heard the funniest introduction ever from a bus driver – ‘I don’t like to be called Driver, Miss or Ma’am. My name is Nesha, if you can’t remember that then just walk up to the front of the bus and start talking.’

We pulled into Sacramento on one of the hottest days of the year. I decided to power through and walk to my hostel, which in hindsight probably wasn’t a good idea. Don’t listen to the directions on Hostelling International’s website. They are for the old Greyhound station, which was really close to the hostel. The new station is miles away. After sweating out what felt like half my body weight, I arrived at my first proper bed and vowed to take a cab back to the bus station when I left Sacramento.

One of the reasons I love staying in hostels is that each one is unique. Sacramento HI is housed in a beautiful (rumoured to be haunted) old mansion house. It is an incredible building to stay in, made all the nicer by the super friendly, welcoming staff. Plus, they have free use of towels, great kitchen facilities and cheap laundry facilities. 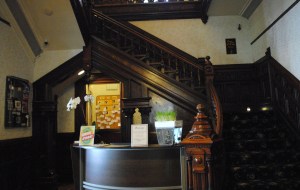 Greyhound Oakland to Sacramento: from $7.00

Dorm beds at HI Sacramento: from around $30 per night