Probably the deepest thing I have ever seen is the Grand Canyon. It’s so big that it was almost too much for my mind to take in, I still felt like I was looking at a picture. 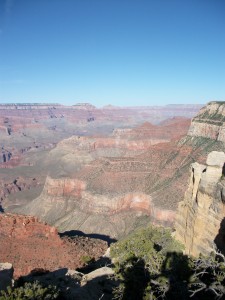 Melissani Lake in Kefalonia is one of the most entrancing places I have ever been. Although the lake itself is very shallow, it sits at the bottom of a deep cave. Sunlight streams through a hole in the top of the cave and turns the water to an incredible turqoise blue. 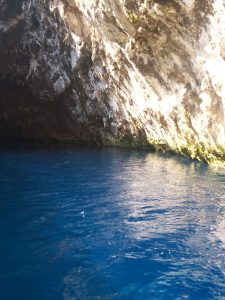 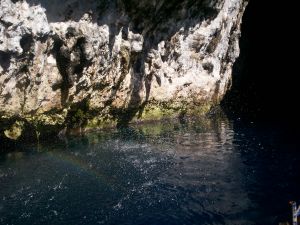 And finally, trying to snow shoe walk in deep snow at Seefeld in Austria, with hilarious consequences. 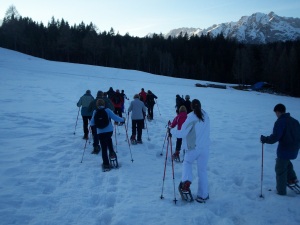 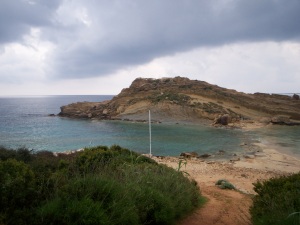 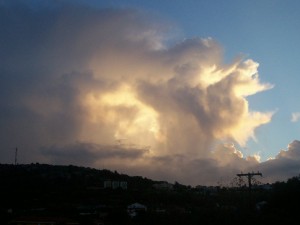 I thought I’d use this week’s photo challenge to once again show you a couple of photos I took when I was living in Kefalonia, Greece.

The weather on the island repeats it’s pattern for most of the summer: it gets hotter and more humid, there’s a HUGE thunderstorm and then there’s an earthquake. Even now that I’ve been back in the UK for over five years, I still wait for the earthquake every time there’s a storm. Luckily it never comes here, though.

Click here to see what everyone else came up with for the Weekly Photo Challenge: Foreshadow.

In complete contrast to this weeks photo challenge, Colour, Ailsa’s travel theme this week is Pale. Click here to see the other entries.

When I thought about which photos I could use for this theme, I was reminded of a shot I took whilst I was working on the Greek island of Kefalonia. The weather in Kefalonia swings dramatically from glorious sunshine to huge thunderstorms and their resulting earthquakes. In nice weather, the White Rocks beach and rocks are a blast of bright oranges and yellows, under a vivid blue sky. I took the photo below just as a storm was coming in from the sea, and the rolling clouds seemed to wash all the colour out of the scene. It was an incredible sight, and I’m glad I captured it.

I love photos of multiples, so much so that I have a postcard collection of them that I have picked up from around the world. Wierdly, though, I don’t seem to take multiples shots myself. When I looked through my photos, this was the only one I could find. 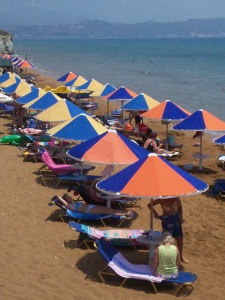 Most beaches in Greece look like Xi Beach in Kefalonia (above), with lines and lines of parasols. Unlike Xi, however, the parasols are usually a plain white or yellow, quite often with the name of a hotel printed on them. These parasols caught my eye because of their bright colours.

Ailsa’s Travel Theme this week is Hot. As it is currently incredibly cold here in Wales I’m hoping this theme will help me feel a bit warmer.

Ailsa’s travel theme this week is mystical. The word mystical immediately reminded me of my summer working in Kefalonia.

Kefalonia is part of the Ionian Islands in Greece, and is situated between Zakynthos, or Zante, and Corfu. I must admit, when I first went to work there I knew absolutely nothing about the island. An old manager of mine from Rhodes had persuaded me to move to the other side of the country to work on a team that she was taking over. I was a little surprised, therefore, when she mentioned on our first day of induction that ‘Kefalonia is famous for it’s earthquakes’. What? I suddenly piped up from where I’d been half-listening in the corner of the room. Nobody had told me about the earthquakes until now.

Kefalonia experiences earth tremors, which are like little tiny earthquakes, every day. The big quakes happen about every one to two months in the summer. Even though scientific evidence for the earthquakes is readily available, in a land shrouded in so much myth and legend, it’s hard to believe that there’s not some Greek God at work somewhere. I soon learnt that the biggest earthquakes happen after a storm. I took these photos of a storm that was brewing over the island. The storms, and the following earthquakes, happened quite a lot in the six months that I lived there, and every time was no less mystical. One minute the island would be basked in glorious sunshine and 45 degree heat, and then all of a sudden huge rain clouds would roll in and the sky would turn grey before releasing heavy rain, thunder and lightening.