Recently, I read an article by Doug Lisle on the Forks over Knives newsletter about how living plant-based will one day be the norm, but as with every major change that humans make, it takes time and unfortunately will not be in my lifetime. Although those of us who are already plant-based find it frustrating to watch people stuffing their faces with junk food and processed chemicals, especially when it is parents feeding their children, we have to accept that change will not happen over night. As Doug Lisle says in his article:

‘Think in terms of the march of human enlightenment, and it can help you relax. A hundred years ago, women weren’t allowed to vote. We are only about fifty years since the civil rights movement. Today, we look back in amazement at the primitive thinking of the average citizen in previous eras. Cultural perceptions can change — and usually in the right direction.’

My family have always been fairly supportive of my food and lifestyle choices. Althought they are all omnivores, they cook vegan food for everyone to enjoy when I visit and take my diet into consideration when we eat out. They’ve even admitted to seeing the benefits in living plant-based – mainly that they are ill all the time and I very rarely am. However, they still hold with the idea that was planted in their head as children that they should eat other animals, although they’re never able to explain why. My mum in particular likes to drag me into conversations about my diet, then when I don’t agree with her on something she accuses me of being narrow-minded and tells me that I need to learn to respect other peoples’ beliefs. Although my personal belief now is that humans are meant to eat plant-based food, I do respect the fact that everyone chooses what they eat and what they feed their children. I never preach about being plant-based or try convert everyone to eating vegan, but I’m happy to discuss it with people and answer their questions if they ask. 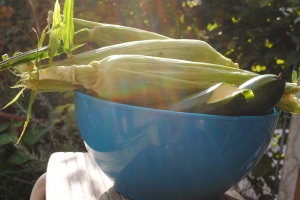 Last Sunday, I attended my niece and her cousin’s naming ceremony in Innsbruck. It being Austria, the food consisted of a lot of meat and dairy. Even before I became plant-based, I found the dairy too much in Austria. As soon as I said I was vegetarian, people would give me huge portions of pasta with cheese, pizza with yet more cheese and sometimes just a plate of cheese with a sliced tomato on the side. During my first summer there, years before I was plant-based, I actually chose to switch to soya milk at home just to have a break from all the dairy.

Anyway, back to Sunday. All three families present had lots of questions about what I eat and how easy it is for me to find food, and they were genuinely concerned that there would be nothing for me. I happily answered their questions, and reassured them that as I had already survived two years as a plant eater, travelling around various countries, a day in the Alps shouldn’t be too difficult.

My sister-in-law had kindly gone to the supermarket before I arrived and picked up a few things for me, including some gluten-free bread. That, along with some zucchini/courgette, corn and potatoes off the grill, olives and salad (with the feta cheese picked out) made more than a substantial plate. I also had a bowl of piping hot carrot soup that my sister-in-law’s mum made. It was delicious. My home-made carrot soup certainly isn’t going to taste as nice now. I would have taken a photo to show you, but I did my usual trick of getting distracted by the food and only remembering my camera after I’d finished.

The general response from people was ‘Wow, you really did find enough to eat without choosing the meat’. And for dessert? Handily, the garden we were using for the ceremony is full of pear trees, and the fruit was constantly falling around us throughout the day. How much easier can you get than food literally falling into your hands?

Aaaarrgh! The weather in Wales has gone crazy! This week we have had snow, ice, heavy (and I mean really heavy) rain and high winds. After getting soaked in town last night whilst trying to find a taxi home (it’s easier to find an England supporter than it is a taxi in Cardiff these days), I awoke this morning to bright sunshine outside my bedroom window. At last, I thought, some nice weather. About twenty minutes later, the hailstones started. I’ve also seen a rainbow today, and whilst I was drawing the above sketch we had thunder and lightning. I don’t think there’s a weather condition we haven’t had.

I did venture out of the house to go to an open day at a local leisure centre today. My main reason for going was the promise of vegan food stalls. There wasn’t a huge amount of food there, and the producers that were there were for the main part ones that I was already aware of. I did get to try the most amazing vegan, gluten-free chocolate cake, though. I’ll never pass up the opportunity to try cake that I can safely eat!

As well as the food stalls, there were also vegan and anti-hunting/animal cruelty campaigners there. They were very generous, and let me collect lots of literature about being vegan and the meat industry. I’m constantly trying to educate myself about plant-based, environmentally aware living. Here are five new things that I learnt today:

When you buy leather, you can’t tell where it came from or what animal it was made from. I always assumed all leather sold in the UK was from cows, but apparently it is also made from horses, sheep, lambs, goats, pigs and possibly dogs and cats killed in Asia. After the drama we had here last week over horse meat being found in supermarket burgers, I wonder how outraged people would be to discover they’re probably also wearing horse skin on their feet.

Our ancestors got their B12 from the soil on unwashed vegetables and in dirty water. This is the answer to a question that I have been seaching for for a while. I knew that meat is the only place you can get B12 in a modern diet, and it’s the only vitamin you lack on a plant-based diet, but I couldn’t understand how our plant-based ancestors coped before B12 supplements. It’s not advised that you eat unwashed vegetables and drink dirty water by the way, just take the B12 supplement instead.

After dinner mints are vegan. I was so happy when I found this out – I love after dinner mints! I’ve just got to check that they’re gluten-free, and then guess what I’m going to the shop to buy 🙂

In their natural state, when cows reproduce, they provide enough milk just for their calves. The dairy industry keeps cows constantly pregnant in order to ensure a flow of milk.

Unlaid eggs are removed from slaughtered hens and used in the commercial manufacture of cakes, biscuits and fresh pasta. As I always say, if you can’t say what’s in it then you probably shouldn’t eat it.